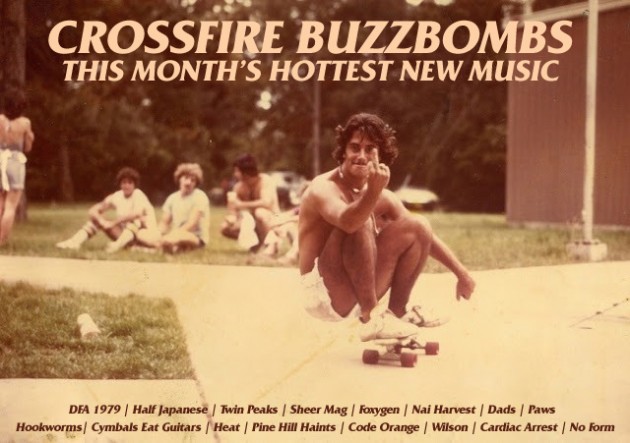 THAT BASS SOUND IS BACK. You know the fucker. It’s an absolute beast and it’s coming at you like a train in this newly released track by the monstrous DFA 1979. Most unoriginal sounding bands fail with double the amount of members, but DFA’s new tunes smack you in the ear like a rush of crack. Welcome back. – Zac

Half Japanese – In Its Pull – Joyful Noise

It may have taken 13 years for some new music from Half Japanese but it was worth it. Many have tried the lo-fi punk thing and made it sound crap but this is an example of how you do it in style. Look out for the new album Overjoyed on Joyful Noise. It’s a treat. – Zac

Chicago’s Twin Peaks deliver infectious, guitar driven anthems that will make you want to run around like a turbo charged Bruce Springsteen. This is a pop song crafted the right way: short in length, jammed with infectious hooks and a message that inspires. Let ‘I Found A New Way’ set the standards. – Dave Palmer

Channelling a classic rock vibe via psychedelia, indie and 70s punk, the debut EP from Philadelphia’s Sheer Mag is four tracks of fuzzed out joy. Odd time signatures, lo fi recording and a vocal as drenched in distortion as the guitar licks make this the perfect soundtrack to a BBQ with some cold ones. Woozy highlights come in the form of ‘Point Breeze’. – Jono Coote

Californian psych rockers Foxygen’s new single ‘Cosmic Vibrations’ opens with a brain-frying burst of noise before the band lurch into a pure Neil Young drawl and drag that bubbles with acid-fried country psychedelia. Their new album …And Star Power arrives in a month and if this sample track is anything to go by, it’s going to mulch your minds. – James Sherry

Fans of odd vinyl shapes rejoice. The new Dog Knights Productions’ Flower Split continues the sound Nai Harvest honed on the brilliant Hold Open My Head EP earlier in the year. Despite new efforts from Playlounge, and both bands covering eachothers material, Nai’s ‘Buttercups’ is the clear highlight here. A mix of shoegaze, twiddly emo and 90s alt rock, it shouldn’t work but somehow it does, get into it. – Tim Lewis

Self-effacing punk rock is hardly a brand new concept, but it’s so easy to get wrong. Thankfully, ‘Chewing Ghosts’ by New Jersey two-piece Dads get it just right with their Replacements meets Cap’n’Jazz power-pop. – Joe Parry

Documenting their first trip to LA by recording an entire live set to tape, Glasgow’s Paws dropped the resulting album earlier this month. It’s an intense and ferocious 13 songs, showing a terrifyingly good live band then – fuck knows how great they are now. At the top of the pile, just eclipsing the Mark Hoppus-approved ‘Jellyfish’, is a reborn ‘Needle in the Hay’, curing Elliott Smith’s morose lament by making it as vicious and urgent as it should be. – Chris Bunt

The first cut to be taken from the Leeds psyche-weirdos Hookworms’ new album The Hum, ‘The Impasse’ jumps straight in with an MC-5-esque smack in the face, capturing the spirit of their ferocious live shows. – Joe Parry

Taken from Cymbals’ third album, Lose, ‘Warning’ steams in with sincere sentiment and attitude. However, pop sensibility looms in the form of spiraling guitar melodies and soaring choral harmonies. If you’re after a new indie rock guitar anthem,’Warning’ is the hit you need. – Dave Palmer

Adopting an irresistably catchy chord progression and a spiraling vocal hook, Montreals Heat churn out ‘Bohemian Like You’-style grooves that you simply can’t refuse. If you’re a sucker for a neat guitar riff then ‘Susisfine’ will have you in a spin for sure. – Dave Palmer

A laid back toe tapper of a track characterised by a piercing musical saw, this appreciation of traditional instruments not only makes for a unique live show, but adds an unexpected element to already beautiful and exciting musical arrangements. This is the sound of a group of people bringing together a variety of traditional elements and managing to create something completely unique. If you don’t know them, check their back catalogue out; then go out and see singer Jamie on tour with Serious Sam Barrett this September. – Jono Coote

Deathwish Records’ Code Orange Kids have gone through a whole lot of changes for their upcoming LP, I Am King. Most noticeably, things have all gone a bit creepy. Now known as Code Orange, flags proclaiming “Thinners of the Herd” are showing up during live shows, the video for previous single, ‘I Am King’ featuring messages being carved into bodies and now this. ‘Dreams In Inertia’ is their slowest song yet but is certainly no less intense. Nooses tied and bodies sinking into bath tubs, this new video is both surreal and eerie, complimenting the monotonous trawling drums and chiming guitars perfectly. – Tim Lewis

Hailing from Hackensack, New Jersey Citizen Blast Kane play ultra raw and snotty garage punk rock and they’re PISSED OFF at having to wait in the queue for their sandwiches when they wanna eat. Just watch the video and sneer. – James Sherry

If you like the idea of a hardcore rock ‘n’ roll party soundtrack played by five sweaty Detroit dudes, then Wilson’s Full Blast Fuckery debut is for you. ‘Passing On The Left’ encapsulates pretty much everything that’s great about these guys, packing thunderous riff action, some serious shredding and THAT ‘woah-oh-oh’ chorus into less than 3 minutes. It’d probably sound even better blasting out onto a raging, booze-drenched pit, but for now, just crank this one up LOUD. – Alex Gosman

Cardiac Arrest – In the Mouth of Madness (three song taste)

This three song taster from St. Louis hardcore band Cardiac Arrest promises a very good record indeed. Reminiscent of early Boston hardcore or even Negative Approach, in that it throws a healthy dollop of street punk into the mix. You know immediately what you are getting with this, loud, fast and angry, but clinging onto a sense of melody like a pitbull, this is hardcore at its finest. – Jono Coote

No Form – Goddess of Fire/Barrier

Absolute wacko hardcore from up North, ‘Goddess of Fire/Barrier’ was recorded as the opener for Reagent Records’ new compilation and it’s the perfect way to set things off. Always avant garde, frantic violins start the song but this is no Floorpunch rip off, walls of feedback and vocals caked in reverb may follow the trends you’ve seen in bands such as Gag and Perspex Flesh, but No Form find a way to put their own twisted twist upon it. – Tim Lewis