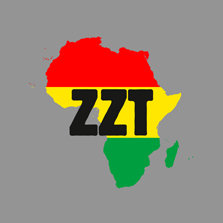 ZZafrika is the third release to come from ZZT in four years, an analogue-heavy leftfield techno project that resulted from the collaboration of two headachingly awesome omnidancemusic producers Zombie Nation and Tiga. This less-is-more release pattern is often as hard to wrap your head around as the records themselves. ‘Lower State Of Consciousness‘ blew up thanks to heavy inclusion on mixes during 2007’s electro takeover and sowed the seeds of anticipation for ‘The Worm‘ which cemented their current reputation of releasing the most refreshing tech-house record (that’s confidently lightyears away from the saturated minimalstepwave scene) every year they release something. I’ll forgive them for slacking in 2009, as Tiga’s Mind Dimension 2, Zombie Nation’s Mystery Meat Affair and his remix of Tiga’s ‘What You Need‘ collectively made up for it. I should probably be demanding an official apology from the pair to compensate for the amount of the braincells I lost freaking out to each.

The hype for ZZafrika was on the enormous Merriweather Post Pavillion scale of hyperbole and fanboy circlejerks. But the live rips just couldn’t be wrong, and as the gorgeously warm chords sift around an expertly crafted beat (as with any record the disco-sampling, MPC-wizard Florian Senfter appears on) it almost feels like they’re making a sly poke at the hype machine’s nature to build up things more tediously than a self-proclaimed progressive house producer. But when the Motherland inspired funk comes in the club should already be punching the air. As for the drop – even twenty or thirty listens later it still feels like being stung by a swarm of killer bees whose stings contain liquid awesome. I can actually feel my brain melting when the final switch up comes around the four and half minute mark. Oh my word. Wo-WOO indeed.

So far, ZZT have made my favourite record of the year every time they release something. ZZafrika does not break this trend and the hyperbolic build up courtesy of the blogosphere is just part of the ultimate ride to a drop only these two can deliver.