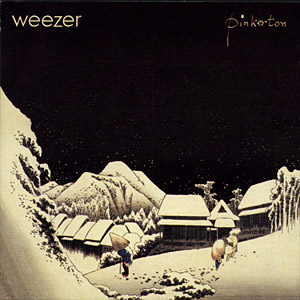 Pinkerton is an album close to the heart of many a Weezer fan. And ultimately, this new edition of the classic is very much a fan’s collection of songs. The first disc features the original album but also has some superior B-side gems tacked onto the end. ‘You Gave Your Love To Me Softly’ and ‘I Just Threw Out The Love of My Dreams’ are undoubtedly two of Weezer’s best songs to date and haven’t really received the attention or prominence they deserve on a Weezer release until now where they are featured in proximity to the original collection of songs that is Pinkerton. Almost as a natural extension of the record itself. Some alternate versions of tracks also give a more in-depth look at the band’s catalogue and the workings of their songwriting prowess in those days. An interview snippet at the end of the disc sees the band discussing the merits of Pink versus Blue in a radio interview. If I have one qualm about this release it’s that maybe this interview track should have been included on the second rather than the first disc.

The second half of this classic re-issue features a CD of some rough and alternate versions of tracks as well as live and session versions. A theme amongst this particular side of the collection is the band’s tendency to go off on a slightly discordant tangent and mess around with the fibre of the songs in a live setting. This really demonstrates a specific period of live performance for the band as they soon went on to cut right down on playing Pinkerton tracks live (remember when they became disillusioned with it?) and would play any material included in their set in a very straight-up, true-to-the-record manner.

Pinkerton as it stands in its original guise is a joy of an album which consistently and expertly treads the line between perfect pop song and rough around the edges raucous rock onslaught, with a touch of tenderness thrown in too. It’s difficult to fault the album and the wealth of new material added to this new edition will be a most welcome addition to any fan’s collection, particularly with those amazing B-sides. If you’re not big into early Weezer though, you’ll most likely be slightly perturbed by Rivers’ rough and ready vocal stylings in the offerings on disc 2. No matter, stick to disc 1! It’s a classic.