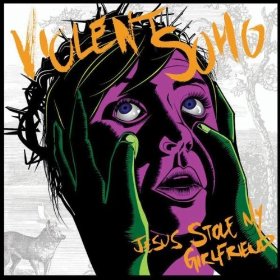 It might be the cultural omnipresence of the notion of planting ideas into someone’s subconscious (thank you Inception, thank you so very much) that’s making me write this but I was first introduced to Brisbane’s alt-rock four-piece Violent Soho in a dream. No, hear me out, I’m serious. To my conscious knowledge, I had never been introduced to Violent Soho prior to the lucid events that were unfolding before my closed eyes. And yet, at every pivotal point in this dream, the now unmistakable opening riff to ‘Jesus Stole My Girlfriend’ would play. No matter what was actually happening, whether the room would flood with purple water or my hands would become novelty sized keys, the soundtrack was always that damn riff.

It wasn’t until I heard the song in the office the following day that I learnt that this Weezer-heavy riff served as a prelude to a bunch of long haired dudes spitting about how, as the title suggests, Jesus stole their girlfriend. In the current states of mind I’d hazard a guess that the demise of this imagined relationship narrated by the Oz rockers was a result of someone with equally long hair planting an idea in the girl’s head. The angst in the eye-rolling lyrical punches certainly share the same conviction as anyone who’s suffered the consequence of another becoming absorbed by an idea, which given the nature of the accused girlfriend-stealer isn’t at all far from the case. It certainly works here – a perfect topic to spill some shouty rage amongst a whirlwind of sleazy riffs and vengeful drums. Watch out though, it might sneak deep down into your subconscious and take you over.