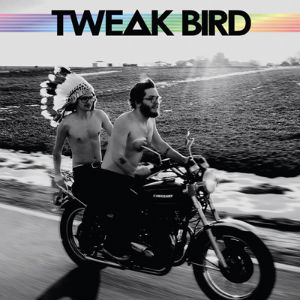 Taking one look at the brothers Tweak Bird, and you might expect a band of their making to be a nerdy bedroom indie project.  Within seconds of hitting play on their self titled debut, however, those first impressions are obliterated by one chugging guitar riff after another. Channelling the spirit of Tony Iommi and Bill Ward, these two kick up quite a racket but also have a unique ear for melody.

Unlike the bulk of heavy guitar based records that get passed around this office, Tweak Bird have songs that are impossible to forget as they buzz around your head for days. Ever since this record first graced the stereo at crossfire HQ, it’s been impossible to escape the likes of ‘Lights in Lines’ and ‘Tunneling Through’, whether it be via the speakers, or staff whistling the tune as they walk through the door.

Much more than just catchy set of songs, though, Tweak Bird delve into, dare-I-say-it, prog territory on past single ‘A Sun / Ahh Ahh’. Their use of theremin and saxophone are potentially risky moves, but prove to be surprisingly successful additions as the band show off their invention and craft.

As last song ‘Distant Airways’ brings the record to a close, the only reservation I have is that it’s all over too soon. Clocking in at just under half an hour, the band avoid the droppings that progressive rock can so easily fall into, and leaves you thirsty for more.