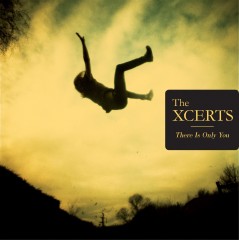 The Xcerts
There Is Only You
Raygun Music

It’s been a long four years since their last release, now Aberdeen’s The Xcerts return with their third, and what looks to be their most defining and immediate record to date, There Is Only You. Revisiting both the streamlined power-pop from debut In The Cold Wind We Smile, and an exorcised version of their sophomore release Scatterbrain, a relentless touring schedule has shaped The Xcerts into a leaner, sharper three-piece, ready to (at last) step out from the shadows of their peers. Chorus after infectious chorus and melody after melody, There Is Only You has earned them the right to do just that.

Opening with the morose, string-leaden ‘2.12.12’, any expectations of a slow, delicate introduction to the album are laid to waste with ‘Live Like This’, a dense and crushing statement of intent. This song, much like the rest of There Is Only You, is heavy but never cold – guitarist Murray Macleod’s desire for the lustful and beautiful fuzz of the Smashing Pumpkins seems to have been fully realised.

As the self-proclaimed purveyors of ‘distorted-pop’, this mantle has never sounded more accurate than on the album’s lead singles, ‘Shaking In The Water’ and ‘Pop Song’. I remember hearing the former at a gig in Exeter two years ago, and that chorus line buried itself into my subconscious even then – if these aren’t already live anthems, they soon will be. In fact, just about every song has a lyrical hookworm in there somewhere, you’ll realise it when you’re mumbling a spare line a few days later.

Despite revelling in heartache and love-lost lyrically, a great buoyancy and optimism weaves through the entire album. The sorrow is disguised by the music itself – the feel-good grind of ‘Kids On Drugs’, the twinkle-rock beginnings of ‘I Don’t Care’, the upbeat bounce of ‘Kick It’ – it’s incredible what an egg-shaker and tambourine can do for a record’s mood. Only once are the happy/sad dynamics torn apart, during album-closer and title track ‘There Is Only You’. Starting out as a passionate and sorrowful lament, the album avoids a bitter endnote by reprising the hopefulness found earlier in the record. To take two contrasting parts and splice them together in this way is a profound and beautiful end to a fantastic collection of songs.

With over a decade already behind them, The Xcerts are veterans in their own right, but There Is Only You feels like a turning point – solid ground on which to build a long, impressive future. Any insecurity about their position on the rock music family tree should be a distant memory by now, for There Is Only You will surely be the album that introduces the world to The Xcerts.