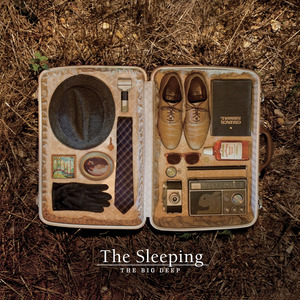 The Big Deep as an expansive, thoughtful record. Every nuance is clearly carefully considered and vocalist Doug Robinson delivers with as much passion and intent  as he always has. Whilst perhaps not as immediately and obviously catchy as the band’s previous efforts, this album ingrains itself in your memory after a few listens and you can really appreciate the band’s new depth of thought in songwriting. Not that any of their other albums are lacking thought. There’s just something more serious about the band’s approach this time. They mean business and set out to make a record that will stand the test of time. They may have achieved just that.

There are more keyboards winding their way through the fibres of the music than there have been on The Sleeping’s previous bodies of work. There’s certainly a distinct sinister feel to both the lyrics and music with tracks like Beautiful Gloom wending their way between conflicting feelings of doom and positivity. Retiring Spies (Change Your Life) taps into The Sleeping’s ability to create an original riff-led groove yet still keep a heavy focus on the melody.

The Big Deep is an album of many layers. It is demonstrates the more somber side to The Sleeping perfectly but despite the prevalence of slower jams on this record, there’s still plenty to get excited about in terms of melodic content and riff-led brilliance.