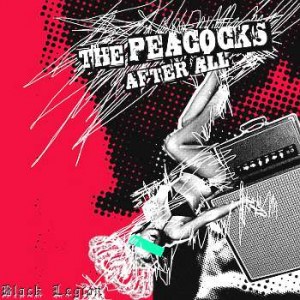 Swiss psychobilly merchants The Peacocks are a well-oiled rock n’ roll machine, not to mention hardened road dogs; yet the news that they recently celebrated their 20th anniversary comes as something of a surprise. Hey, maybe playing psychobilly is the key to retaining your youthful good looks, as these guys seem to be aging well.

Not that it would particularly matter if they weren’t, though, because most of ‘After All’ hits the target in fine style. At fifteen tracks long, it would have been easy for the record to start to blur into one long mass of twanging double bass and scratchy guitar, but as the arresting country-influenced title track bursts forth from the speakers, it’s clear that the Peacocks haven’t lost their ear for a great melody. Those who would dismiss these guys for supposedly not being ‘pure’ psychobilly are missing out; variety is no bad thing, and there’s plenty of it on display here.

For the most part, the tunes clock in at less three minutes, and still manage to leave a decent impression. ‘Boring’ sees the band taking lyrical pot-shots at trend chasers over a simple yet insanely catchy riff; ‘Lean On Me’ creeps along with vocalist Hasu singing sleepily over a lone organ backing, before some rockin’ double bass action kicks in, and the relentless pace slows slightly for the mellow but anthemic ‘Better Times’.

‘After All’ isn’t quite perfect, but overall it’s as fine an example of modern psychobilly as you could hope for – and will hopefully increase the band’s small but loyal fanbase this side of the Channel (strange how psychobilly seems to be much more popular in mainland Europe). Watch out for a clutch of UK dates in November.