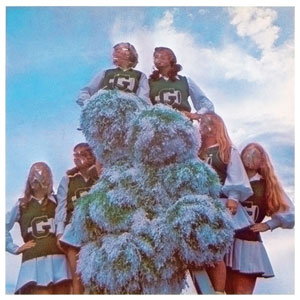 A few things you should probably know about Sleigh Bells, if you haven’t already been over-exposed to the details of their being.

This one immediately became an office favourite. Stupidly over-hyped – if you haven’t heard the music itself yet you might be reluctant to give into the craze – but the truth is that this album rocks. ‘Treats’ is a pretty apt title as each track is a nugget of raucous beats and riffs, topped off with some alternately sugary-sweet and military-like shouting vocals from Alexis Krauss. Widely touted as electro or noise-pop or some sort of combination between the words electro, noise, pop and rock, it’s kind of difficult to decide whether Sleigh Bells are more rock-fuelled or more electronic-oriented. They tread the line between the two influences very well indeed. ‘Straight A’s’ in particular is a flurry of fuzzy loud guitar riffs that could only really fall into the rock spectrum of genre classification. This is followed up with ‘A/B Machines’ which incorporates a jangly guitar riff with uber-repetitive vocals and some siren-type noises and clap-like beats.

Throughout the album, programmed bleeps and beats are coupled with Derek Miller’s crunching guitar riffs. One of the main things to hook you in is the damn hypnotic effect of repetitive rhythms in Sleigh Bells’ music. Where in some music, repetition just makes for boredom, Sleigh Bells use it to great effect with the organized pattern of rhythms making their creations even more enthralling. With there being only two members of this outfit, and only one of them being responsible for all the instrumentals, it’s clear that the duo do rely a lot on programming and electronics to beef up their sound. I mean, their sound is pretty beefy. Not songwriting in the classical sense of the word but, however they’ve gone about making this music, it sounds fresh and original and, above all, makes for one of the most fun listens this year.