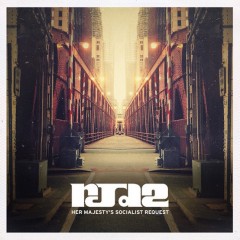 True RJD2 fans were a bit bemused by ‘A Third Hand’ back in 2007 but we are still feasting on it’s lush tunes here this summer in the Crossfire office. The Colossus followed this in 2010 and since then, we have not heard a peep,…until now.

John Krohn will apparently return with a new album this October called ‘More Is Than Isn’t’ and is said to feature various vocalists and rappers, including Blueprint, Livingston, Khari Mateen and P.Black alongside others to be announced. Check out the first single ‘Her Majesty’s Socialist Request’ here, it’s stripped back electronic rock n’ roll number with a filthy little middle eastern shuffle going on.