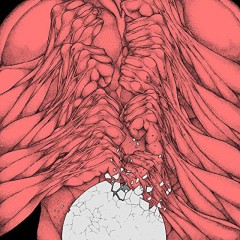 Chicago’s Oozing Wound first rocked my world to its seismic core when I heard their fragrantly titled Split LP with Black Pus, Brian Chippendale from Lightning Bolt’s side project. Their song ‘Ganja Gremlin’ and its wry take on an anti-drugs campaign showed that these guys took life with a pinch of -ahem- salt, even though their willingness to thrash is deadly serious.

On a similar vein, ‘Hippie Speedball’, from their second proper album Earth Suck (gravity to you and me) is, in the words of singer Zack Weil, about “the finest pairing of the succulent Cannabis Sativa to the delectable Coffea Arabica. It’s about weed and coffee, dude”.

To call them self-effacing is an understatement – they use a quote from the New Yorker magazine about being “happy to be a cheap imitation of Metallica and Slayer” as their social media tagline. They are no comedy band though, their musicality is super tight and their record collections obviously expansive – I can hear elements of Dischord label bands in amongst the death metal darkness. Give it a go, not least so you can watch your friends and family’s reaction when you tell them you love Oozing Wound.