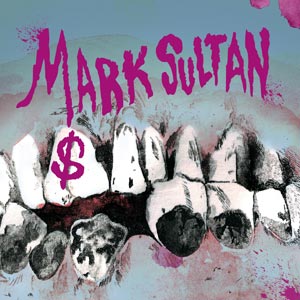 The name Mark Sultan might not set bells ringing, but anyone who has experienced The King Khan and BBQ show will have firsthand experience of the man’s genius. A stalwart of the modern garage rock scene, Sultan has toured with Black Lips, Vivian Girls and Clinic and released records on prestigious labels from Sub Pop to In The Red. Now, you feel, is the time for Mark Sultan to make a name for himself in his own right.

New album ‘$’ on Last Gang is good enough to do exactly this. After murky album opener ‘Icicles’, Sultan gets into his stride by combining his signature fuzzy guitars with a doo-wop twist that makes him stand out from the crowd. An early highlight is ‘Ten of Hearts’, a slower paced, almost ballad-like song that highlights Sultan’s vocal prowess. There’s a strong 60s influence at play here, yet the production has a modern edge which give the instrumentation an instant kick.

Further standout tracks follow thick and fast, whether it be ‘Go Beserk’ with its punchy riffs and infectious chorus hook, or the soulful croon of ‘I’ll Be Loving You’. This variation serves the album well, with enough stomping garage rock tracks but slower songs which give it a gooey romantic core.

Of course this path has been trodden many times before whether be in Garage rock’s initial conception or it’s revival over the past decade, but few artists carry it off better than Sultan. ‘$’ is a record made by somebody with a vast knowledge of source material new and old, and it shows by paying perfect homage to its heritage.