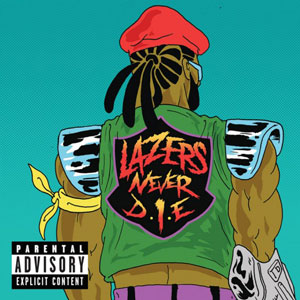 It’s somehow fitting that Diplo and Switch should release an EP now, just as M.I.A.’s highly anticipated third album falls hard on its face. After the huge (and largely tedious) press campaign surrounding the ultimately bloated (and even more tediously titled) ///Y/, Major Lazer have managed to cobble together an EP that is fresh and exhilarating. Although there are only two new songs here, additional remixes from Buraka Som Sistema, K.L.A.M and Radiohead’s Thom Yorke make for a surprisingly cohesive five song package.

It’s in fact M.I.A. who sets Lazers Never Die into motion with ‘Sound Of Siren’, serving as a timely reminder of the chemistry she shares with Diplo. The classic ingredients are all there; a big chorus hook and military drum beat form the song’s structure, while Busy Signal goes in hard over the verses. There’s nothing overly complicated about Diplo and Switch’s production, they simply know what sounds good and execute it perfectly time and time again. ‘Good Enuff’, too, is little more than a simple reggae progression, but vocal contributions from Collie Buddz and Lindi Ortega add instant and memorable melodies.

Switching attention to the remixes, tracks from 2009’s Guns Don’t Kill People – Lazers Do are reworked and given new dimensions. Buraka Som Sistema’s take on ‘Bruk Out’ is extended into a six minute house jam, yet it somehow manages to keep the original’s authentic flavour. While K.L.A.M.’s ‘Can’t Stop Now’ remix is perhaps the only dud of the bunch, the ‘heavyweight’ contribution from Thom Yorke really delivers. Yorke’s spin on ‘Jump Up’ keeps the vocals firmly in the foreground, yet adds layers of tense electronics that put the song into a new context. While it’s typical of Yorke’s past solo adventures, his remix emphasizes the best qualities of the original.

It would be easy for Diplo and Switch to lay back and rest on their past successes, yet Lazers Never Die is another record that both individuals can be proud of. Major Lazer don’t get bogged down in big concepts and ideas, they simply make tracks that BANG.