Link To The Past / Rapidas
Ram Records 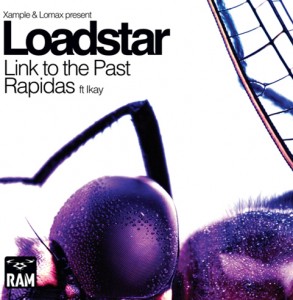 It’s always a source of nervousness when two producers get together to form a collaborative project – will it be amazing or will it career into the gutter with too many styles vying for their place on the track? Thankfully, Lomax and Xample’s Loadstar proves to be very much the former. Already both hyped in their own right, the duo have released Link To The Past and Rapidas on the ever-brilliant Ram Records and have delivered two slabs of banger.

Link To The Past kicks in soon after the intro begins with its gritty bassline’s crescendo, unrelentingly humming over the crisp beats underneath it. Having already been dropped by numerous DJs including their label boss and highly influential Andy C [who showcases their talent in his upcoming Nightlife 5 mix], it’s easy to see why this track gets so much love in the clubs. Four minutes is gone in no time which is testament to the powerful throb of the track and leads perfectly into the second track on the CD.

Rapidas is slightly more of a bubbler with an understated intro kicking off proceedings before the vocals enter the fray. As ever with big D&B tunes, as important as the build-up is, it’s all about the drop and Rapidas manages to include such a drop whilst not veering off into the thunderous b-line of its predecessor. An altogether mellower track, it still packs a punch and has plenty for the headphone listener to pick up on.

This is just a taster of what’s to come from Loadstar and 2011 promises to be a big year for them both.