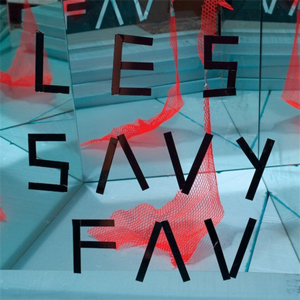 “We’ve still got our appetites”, repeats the chorus hook from Root For Ruin’s opening track, the very question on the lips of Les Savy Fav fans hungry for new music. The band’s last album Let’s Stay Friends saw them reach new levels of critical and commercial appreciation, but three years later the band are back, wrestling the commitments of being in a touring band with having families and growing up. Not a particularly punk rock idea to be getting across in the opening paragraph of a record review, but rather, the grim reality of life as a maturing indie band that sticks to their guns.

The good news is fans of the Fav needn’t worry, as the band has cooked up another great record to fuel their energetic live performances. The opening two tracks ‘Appetites’ and ‘Dirty Knails’ are vintage Les Savy Fav rock tracks, taking the distinctive guitar sound the band have perfected on recent albums and turning it up loud. From here on, however, things take an interesting turn.

‘Sleepless in Silverlake’ is a slow burner, using a wistful lead guitar line with lyrics about staying up late drinking and pissing cares away. ‘High and Unhinged’ is a song about “waltzing our way to the bottom of the barrel”, while ‘Dear Crutches’ is wearier still. It’s this song which gets to the heart of ‘Root for Ruin’, an album about getting older, feeling cynical and the effects of being constantly on the road. While I hate bands that whine about touring, this isn’t at all the tone taken by vocalist Tim Harrington. Instead, the singer gives an honest account of his state of mind, adding an extra dimension to the band’s recorded sound.

Don’t get me wrong, this is not a downbeat album, and there are still rock tracks aplenty. Single ‘Let’s Get Out of Here’ is the poppiest the band have ever been, approaching something very close to a radio friendly sound. After the success of an out and out rock album with Let’s Stay Friends, however, it would make no sense to repeat that process all over again. Les Savy Fav have taken this point in time to nicely re-evaluate their career, mixing enough of the spirit of old with something new and refreshing. Perhaps not what I expexted from Les Savy Fav, but to these ears this is a resounding success.