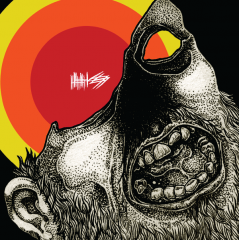 Hailing from Cardiff, Hogslayer churn out the kind of coma-inducing noise that can only be described as pure filth, and fortunately for you they’re releasing a brand new album brimming with it on May 4th via Undergroove Records.

First cut from the album, ‘Despiser’, rests on a low-slung, down beat groove that’s heavier than Torche playing in an ironmongers. Their doom-ridden riffs entwine to form a truly intoxicating sound, one that rests on the bands decision to recruit two down tuned bass guitars, rather than your standard six string silliness.

With a name like Hogslayer, a music video that’s basically five-minutes of a screaming beard, and a frontman who calls himself Lord Bastard, you simply can not refuse this offering of pure sludge.

Watch the video here and catch them on tour at the dates below.