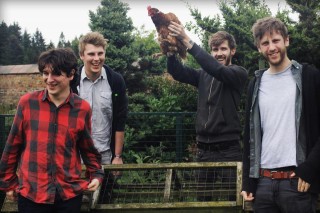 It’s safe to say that Dublin’s Girl Band blew everyones mind at the start of the year with the utterly mammoth sounds of ‘Lawman’ and ‘Cha Cha Cha’. Their early 2014 shows sent us double giddy with new, genuinely exciting music from a band that, at times, could craft truly indescribable sounds.

Following on from these early live successes and mind melting first singles, Girl Band embarked upon a rigorous touring regime, having spent the best part of this year cruising round the UK spreading their deliciously destructive noise as far and wide as possible. Now, they come to you with latest single ‘De Bom Bom’.

This is everything you’d suspect and more. Clearly these four Irishmen have developed a different way of musical thinking, for their primitive yet simultaneously advanced and futuristic sounds recall of very few before them. Such pioneers as Albini and Yow might spring to mind, but these are merely two comparisons, without doubt there are many journalistic minds that would cram all kinds of obscure reference points next to Girl Bands relentless, unforgiving music, but for now, there’s little to say other than, “you must listen to this band“.