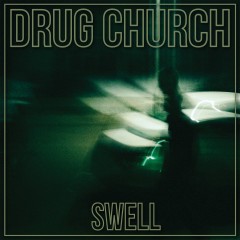 A great deal has happened since 90s alt influenced punks Drug Church‘s debut LP, Paul Walker. Vocalist Patrick Kindlon has released a number of records with his “main” outfit, Self Defense Family, the band have toured the USA multiple times, and have an upcoming European tour with Title Fight and Gnarwolves planned. It’s not only a struggle to imagine how the band found time to release this EP, but also what’s arguably their best record to date by quite a stretch.

Opening with their most experimental cut yet, ‘But Does it Work?’, this deeply cynical list sets the tone of the entire EP. Kindlon’s almost Morrissey-esque repetition of the phrase “nothing works”, coupled with heavily monotonous rhythms, makes this easily one of the most interesting and engaging songs in Drug Church’s discography, let alone this record.

Kindlon’s song writing prowess extends with EP closer ‘Zero Zero’s lyrics horrifically relatable for anyone with an over-active brain. The opening line of “I care an unhealthy amount about things I can’t at all help / I care a bit too much for those who choose to stay out of touch” sums up the song perfectly before he appears at his most biting with the lyrics, “gas station food and bus station people, a moment to share, surrounded by equals”.

Musically, Drug Church clearly take cues from bands like Quicksand and Seaweed (though I’d argue DC are far more interesting than either). Buzzsaw post-hardcore guitars with moments of shoegaze riffs (again, see the brilliant ‘Zero Zero’), if you were a fan at all of the debut LP it is vital that you pick this up. If you’re unfamiliar, then start with this record, five brilliant songs clocking in at just 16 minutes, it is the perfect length. Perhaps too many bands take influence from the 90s but it’s unlikely you’ll find it done much better than on Swell.

Swell is out now on No Sleep Records.