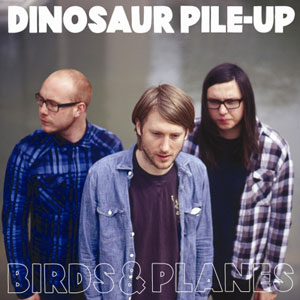 This is the first single from Dinosaur Pile-Up’s forthcoming album ‘Growing Pains’. ‘Birds And Planes’ is a tightly wound ball of energy, fuelled mainly by a stonking great riff and some huge hooky melodies. Both catchy and heavy in all the right places and all the right doses, this track has been making headway in the notoriously difficult-to-crack world of music radio. And rightly so. There are no frills here, just honest, straight-up songwriting skills. If you’re after a summer anthem, you need look no further. Matt Bigland’s assured vocals are backed up by an astoundingly massive wall of sound, especially considering this is music from a three-piece setup. Yes, it’s a little bit Foo Fighters, a little bit Nirvana, but ultimately, DPU have breathed new life into an otherwise stagnant genre and created something that, whilst it may not be overflowing with absolute originality, is essentially exhilarating and exuberant.

‘Birds And Planes’ is a slice of catchy rock music that’s not setting out to change the world but is aiming to bring a smile to people’s faces and incite them to sing along with glee. If this single is any indication of what is to come with their album, it’s a record that’s going to be in contention to make many ‘Best of 2010’ lists.

The band are set to hit the road in October prior to the album’s release on 4th October and, assuming they can recreate the massiveness of this single in the live arena, you’re going to want to check them out.

You can listen to the single and download B-side ‘Headspinner’ at www.dinosaurpileup.com.