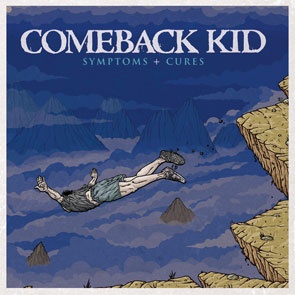 Simply put, ‘Symptoms And Cures’ is a must listen. If you’ve ever been a fan of the band’s material, old or new, you’re *really* going to want to check this one out. Comeback Kid have come into their own on this album, marrying their classic hardcore edge from first albums ‘Turn It Around’ and ‘Wake The Dead’ with a fuller, more intricate sound which had been hinted at on last full-length ‘Broadcasting…’. This is the sound of a band that, having undergone several line-up changes during their time as a unit, have really settled into a groove, incorporated their cumulative experiences and just let rip on a stunning album. It’s a masterful balancing act between short sharp blasts of hardcore goodness and more expansive textures, which will go some way to challenging perceptions of modern hardcore. It’s far from a recycled collection of material. ‘Symptoms And Cures’ is something truly fresh-sounding, which is rare in Comeback Kid’s world.

Comeback Kid have roped in several helpers on this record too. Rather than standing out like sore thumbs, the guests add extra layers to the music and are perfectly complementary. It’s a gang-vocal-heavy record which means that it’s all the more rousing a listen. A Wilhelm Scream helped out with some of these anthemic chants. Also appearing on the album are Sam from Architects and Liam from Cancer Bats adds his distinctive growl to the track ‘Balance’. It’s kind of hard to convey in words the way that Comeback Kid have produced such a complex but altogether simple album. It’s also difficult to listen to it without feeling the passion and dedication that’s clearly gone into this body of work. I haven’t read or heard one negative word about ‘Symptoms And Cures’ yet. This, along with my own gut feeling and love for the album, leads me to the conclusion that this is Comeback Kid’s defining work – of their career so far, anyway. Yes, they had ‘Wake The Dead’ and that will forever be a rock club staple, but their latest album offers up so much more, delivering real depth of sound as well as the catchiness people know and love them for. More please. And maybe take less than three years about it next time?!