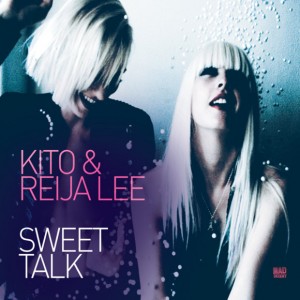 Already having been picked up by Skream, Australian beat-maker Kito has forged a potent reputation for production even fairly early into her career with the sublime Cold and What If tracks released on the Disfigured Dubz label. Now she’s unleashing an EP with Reija Lee on vocals on Diplo’s Mad Decent label and the four track release doesn’t disappoint.

Where the Disfigured tracks were distinctly deep and bassy, the EP switches the styles up, allowing Kito to flourish under the spotlight and show off her ability to throw down the unexpected and come up smelling of roses. Opening track Sweet Talk drops immediately into fuzz with bouncy stabs twanging around Reija’s vocals, the two mixing perfectly from the word ‘go’.

Broken Hearts thuds a bassline out loud marching along its three minute lifespan and again shows another side to the producer’s skill and outlay. It’s the final two tracks of the EP that are the standouts however with On The Jam providing a stark intro underneath Lee’s singing before the swirling into incessant hi-hats and finally drawing for the next dimension in the final third of the track.

This City mixes its humming basslines with almost 8-bit like bleeps, closing out the EP with booty shaking intent, Lee’s vocals again rounding off the sonic landscape in excellent fashion. These two are quite a duo and if this short release is anything to go by, the world is theirs for the taking. Definitely one to keep an eye on.