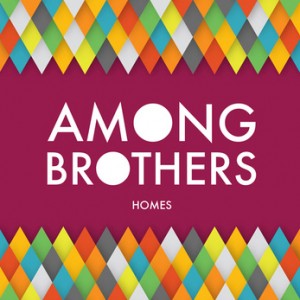 Having introduced themselves with the excellent Zero Years compilation last Spring, Cardiff based label Barely Regal have moved on to release the debut EP from Among Brothers. Featuring both of the label’s co-founders, Among Brothers are a six piece chamber pop outfit, combining jittery electronic rhythms with a colorful mixture of guitar, keys and violin. Although this might be a well trodden path, the band’s purposeful and emotive songwriting makes this EP a compelling listen.

Things start very brightly with ‘Montgolfier’, the record’s first and possibly best song. Serving as a welcoming opening statement, the use of choral vocals creates a terrific urgency and drives the song through it’s modest 2 minute length. Comparisons to Efterklang will inevitably be made here but this is no criticism, as few bands could pull this off with such conviction. Arguably the song stops a little short (it really could go on for a lot longer), but its short length whets your appetite nicely.

From here, the results are more mixed, but there are flashes of inspiration throughout. Particularly album closer ‘Great Famine Family’ which runs ‘Montgolfier’ close for the EP’s best track. Again choral vocals are used effectively here, creating a euphoric climax punctuated with intimate piano and subtle electronic glitches. In fact, the barely-there electronic bleeps and scuffles are particuarly effective, perhaps another nod to early Efterklang records.

While ‘Homes’ is a strong first release by any standard, there are also signs that there is something better to come from Among Brothers. For Barely Regal, too, this is another promising release from a growing indie label.