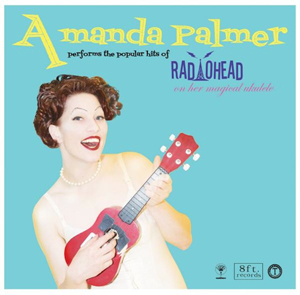 When Amanda Palmer of the Dresden Dolls decided to split from Roadrunner Records earlier this year she did so for the benefit of being able to release music any way that Amanda Fucking Palmer wanted to. Her actual words regarding the matter were ‘I’M FREE AT LAST. RAHHHHH’ and sure, this might sound like the exclamations of someone who’s finally lost their shit but she’s since released her first EP, unambiguously entitled ‘Amanda Palmer Performs The Popular Hits Of Radiohead On Her Magical Ukulele’. Unquestionably, she has indeed finally lost her shit.

For me as a listener and lover of music made by people who are doing whatever the hell they want (and particularly those who attribute magical powers to cheap thrift store instruments, because come on…) this was fantastic news. And the EP delivers exactly what it promises. Amanda Palmer bounces her way through some of Radiohead’s biggest hits pre-Amnesiac (the eerily happy and wonderful rendition of Idioteque is the most recent song she tackles – although tackle really isn’t the right word, and Ukulelehead is definitely accurate wordplay) and it’s nothing short of fucking magical.

Beginning with the expected uke crossover ‘Fake Plastic Trees’ it would be easy to expect the EP to follow in a similarly obvious fashion; this is not the case. Exit Music is given the sombre piano treatment it screams for, but is somehow made even more frightening with some drunken banshee howls to bring it to a devastatingly tragic close. No Surprises is equally despondent, making that bright ‘this-is-how-i-release-music-now-you-slags’ cover seem almost like a big trap. Not unlike when someone tells you a racey joke and then say that they’re not kidding. This EP is bright and joyful and deeply, deeply upsetting at the same time. I’m not kidding.

You can pick up the EP by following THIS LINK. It’s only 84 cents (which is like, half a penny) and that all goes in Radiohead and Paypals pocket. Any further donation you make goes straight to Amanda herself. You should all fund her musical insanity because I’d love to hear more things this!