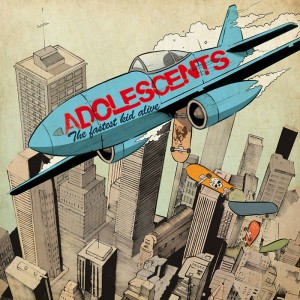 When it comes to the essential North American Hardcore Punk recordings, The Adolescents debut album is easily a requisite. Originally released in 1981 (on Frontier Records) these kids from Orange County, California totally nailed the pent up teenage angst of living in a conservative and sterile environment where they felt total alienation. The snotty frustrated message they unleashed in those songs has persisted in connecting with subsequent generations of outsiders, and remains as fresh and relevant sounding 3 decades later.

The bands subsequent history has been a turbulent ride of bust ups, break ups, make ups, line-up changes… and occasional new recordings… the last full length being 2007’s very credible “O.C. Confidential”…. and now the long threatened new album has finally landed. And was it worth the wait? Oh yes!

Original singer and bassist Tony ‘Reflex’ and Steve Soto are still firmly at the helm. Clearly, they are no longer adolescents, and the subject matter of their latter day material is reflective of that; with families of their own, the politics at the forefront of their consciousness are more global than personal. Their Governments war fuelled agenda does not rest well with the modern day Adolescents and forms an overriding theme to a big chunk of the songs (“Wars Aren’t Won, Wars Are Fought”, Peace Don’t Cost a Thing”, Babylon by Bomb”, “One Nation Under Siege”) but there’s a constant theme of hope and belief that this world could be a better place. And California might brand itself as the ‘Golden State’, but the barrelling “Serf City” paints a different picture, of a place that’s politically and socially stagnant…. “stare down the mighty coast, as you dive in to the pills, take another ride… it’s a roller coaster thrill”.

Tony’s pipes sound mighty good for a guy that’s been hollering his lungs out for over 3 decades! And the songs are awash with the bands signature surf laden hooks and loaded with a rush of fancy rocking rifs that will be sure to satisfy dedicated OG’s and groms alike… my wife just called out “this sounds like The Adolescents”… sure does…!!