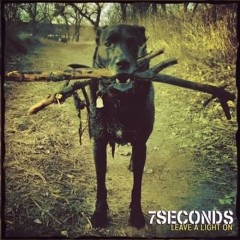 7SECONDS
Leave A Light On
Rise

Slapping a new 7SECONDS album on the stereo in the year 2014 is pretty amazing in itself. The fact that it’s really great is even better!

Around since the dawn of The Eighties, and at the forefront of North America’s Hardcore explosion, 7SECONDS have quite rightly earned their place in history. I first heard them in ’84, via the track ‘Out of Touch’ on a flexi disc, before graduating to their debut album The Crew. I was immediately taken in by the rapid-fire blasts, with songs about friendship, honesty and equality; there was an air of optimism and positivity to their message. 7SECONDS were soon stenciled on the back of my leather jacket. I’ve been tuning in ever since.

All these years later, the positivity is intact, and opening track, ‘Exceptional’, catapults out of the speakers. It’s winning pumped up chorus, “I don’t need your sorrow, don’t need your sympathy, I’ll get up tomorrow and fight the apathy”, pretty much sums up the attitude of this band; don’t sit around feeling lazy and miserable for yourself, get up and make something happen. I’m very much aligned with the can-do mentality. So yeah, of course I’m fuckin’ diggin’ what they say!

Musically, the band solidly deliver the goods. Steve, Troy and Bobby boldly hammer out the tunes, whilst those oh-so-familiar impassioned pipes of Kevin Seconds find the veteran frontman still singing his heart out, slamming hate-mongers and “so-called patriots” go!

A few select tracks grabbed me instantly, ‘I Have Faith in You’, ‘My Aim is You’, ‘Rage Quit’, ‘Someday, Someway’, ‘Upgrade Everything’, but seriously, having spun this album back to back half a dozen times, I’m really into all 14 songs. And any band that’s been going for so long deserves to write a song about themselves, in this case the self-depreciating ’30 Years (And Still Going Wrong)’.