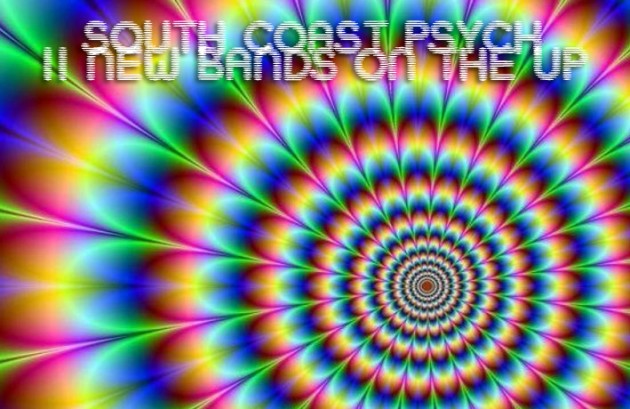 Though it’s not entirely convincing that the English Channel has had any direct mystic effect upon fledgling psych and garage bands from Britain’s South Coast, there’s definitely a scene on the fringe beyond London who are crafting raucous garage rock and psych gems. From the buzz of Brighton to the tamer waters of Southampton and Portsmouth spans a collective of musicians who, despite looking back in retrospect, have one foot forward. From bands drawing influence from the gritty sound of US Garage to those taking upon the UK Beat sound, Britain’s seaside towns have spawned a vast and varied array of new acts. Immerse yourself in everything from relentless noise rock to gentle psych pop and dive into the coasts burgeoning new talents below.

Ethereal and spacious sounding, Dead Rabbits air hypnotic transmissions. With a sound like Spacemen 3 strung out on Valium, it’s hard to resist the levitation inducing sounds of the Southampton five piece.

With a sound that wouldn’t be out of place in the backroom of a dive bar somewhere off the beaten track, Strange Cages’ desert-psych toys with an American sensibility. Wavering Sky Saxon vocals and sultry guitar sounds channel the counter-culture rebellion and attitude of 60s garage rock.

With the pained crooning of a Vegas ballroom singer, Brighton’s Wax Machine invoke the feel of innocent 60s pop that ruminates on lethargic sunny days. Think Scott Walker covering The Byrds through a wah pedal.

Fierce by name and even fiercer by nature, Tigercub provide unholy garage sounds in hard hitting doses. Homme-esque vocals and chugging bass lines are prerequisite to the trio’s thunderous sound.

Hefty garage riffs are the focal point to Rickyfitts‘ grunge stained sound. Heavily influenced by the doomier branch of psychedelia, the Portsmouth duo’s tracks are the sound of being kicked in the teeth.

Abiding to a more atypical Rock N Roll sound aesthetic, BullyBones have an all-encompassing sound of 60s Britain. With tracks that could be firmly placed on a Freakbeat compilation, the quartet’s retrospective angle nurtures a ballsy and relentless sound.

Is Bliss’ hazy textures are moulded into opiate delights. The Portsmouth based shoegazers create luscious soundscapes that consist of celestial synths and reverberated vocals that weave in out of their dreamy tapestry.