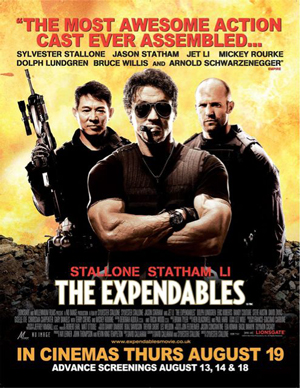 There was one thought that crashed through my head for the entirety of The Expendables, my mind pulsing the words ever brighter in garish neon, growing louder and louder until no other thoughts or thinks could even begin to nudge their way in around it.

I wish this was better.

I could see Stallone’s terrifying silhouette, all muscles carved from cow hide and veins bulging in places no vein should bulge, stretching out for an admirable goal, to re-unite the biggest and brightest from his 80’s action co-horts, along with some new(ish) kids on the block, and reach a sort of crystallised vision of what an action movie means to him. Where the leads aren’t serious thespian types (see Robert Downey Jr or Christian Bale) but rather, almost in-human bundles of meat, tempered in explosions, forged in montage and getting by on nothing but semi-audible one liners and an increasingly ridiculous body count.

Somewhere along the way, Stallone never quite achieves the giddy heights of his best intention, and thus, we have the Expendables, a movie that does not stink of opportunity missed, but rather…a potential for something greater that’s never fully realised.

Part of the problem stems from the fact that Stallone, in his writing of the film, was clearly so enamoured by the assembling of his wonder cast, that he overlooked such trivial things as interesting characters or a semi-coherent and believable plot. Instead, what we get are a bunch of hard bastards running around a tiny jungle island trying to kill an evil General dictator and Eric Roberts for some reason (a deed which, as we all know, is impossible), the only motivation seeming to stem from the fact that said General’s daughter is a bit on the fit side and apparently gets wet every time she wanders into a butchers shop and sees slaps of cold dead meat hanging there…cause she gets awfully goo-goo eyed whenever Stallone’s about…

And thus this wire-thin plot frame serves for a bunch of scenes  involving such hijinks as, a plane raining gigantic amounts of deadly force down on a tiny pier full of faceless enemy soldiers, Jason Statham kicking seven shades of shit out of a basketball court full of nobs, Dolph Lundgrand squaring off against Jet Li and a huge Commando-style kill frenzy at the palace serving as the enemies base. Stuff blows up, uncountable amounts of people die, Stone Cold Steve Austin grunts…a lot…and every ones favourite walking corpse Mickey Rourke dishes out some awfully trite advice about “why we do this job”

Sure, it’s a fun ride along the way, there’s a tongue in check humour about the whole thing that keeps the general vibe of the film a very enjoyable one indeed….and though it does do pretty much exactly what it says on the box….it never quite does it as well as you’re imagination is going to wish it could have…even the sequence where Stallone, Brucey Bruce Willis and the Governator himself have a bit of a chin wag falls a little flat.

If you’re a lover of the sort of films these guys used to make back in the 80’s, you’ll find plenty to love….but even then, you’ll be left wishing for a little more.