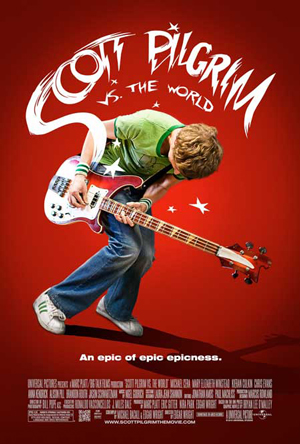 Scott Pilgrim is many things, one part hilarious slacker comedy, two parts SNES sound effects, three parts terrible wigs, four parts awesome fight sequences and the rest is made up of  an aesthetic overload of such bezerk, A.D.H.D suffering visuals that this grey, crusty and constantly more depressing reality we live in will never look quite the same.

It is also concrete evidence that it’s possible to adapt a video game into an incredible film. So long as that video game happens to only exist as a comic boo…I mean graphic novel.

It’s a hell of a fun ride, the sort of thing that you, dear reader – I’m assuming the fact that by browsing this here skateboarding website means you are likely to fall within an age bracket where the idea of drinking something brightly-coloured with mind altering attributes and playing an extremely complex Tekken tournament for days on end without sleep seems like the best god damn idea ever – will utterly empty your bowels for.

The plot follows the hapless Scott Pilgrim, (Michael Cera, doing what Michael Cera does), the bass player in (self-proclaimed) awful (though fantastically named) band Sex Bob-omb. A young man with no real drive and or purpose in his life, until he latterly encounters the girl of his dreams, one Ramona Flowers, played by Mary Elizabeth Winstead in a series of wigs so utterly atrocious it’s a testament to how fucking hot she is that your balls don’t die every time she’s on screen.

However, life’s not easy for our idiot hero and in order to win her hand, he must first defeat her seven evil exes in a series of battles to the death. And cue an explosion of awesome shit.

The film is relentless in it’s pace, we know that Edgar Wright is a pretty fluid filmmaker…but here, he’s pulled out all the stops. It is constantly in motion, characters, camera, scenes, locations, it all just hurtles along like a relentless freight train covered in Nintendo graffiti. But Wright really shows what he’s made of when it comes to the fight sequences, each one upping the ante in terms of  both video-game-referencing visual clout and the exes themselves. Chris Evens and Brandon Routh as a vain skateboarding movie star and a psychic vegan in particular completely steal their scenes. 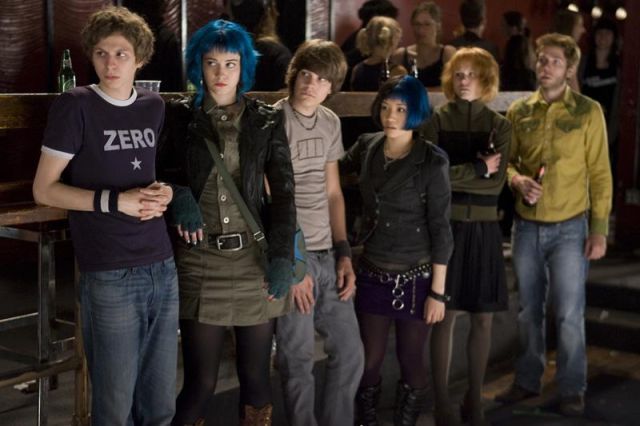 It’s the sort of film that, those who love it, will love it with such a passion that those not in the know will never want to see it; because it’s “that bloody movie that (insert generic name here) never shuts the fuck up about”… So yeah, it’s a pretty damn good film; Wright’s best to date, and one that, in this short space, I will fail to accurately and authentically convey the sheer blitzkrieg that the senses take watching it.

I’ll leave you with this, as the movie opens and the camera pans down over Scott’s house, the Legend of Zelda theme twinkles in over the top. If that tiny little reference is something that would make you fist pump the air and scream “fuck yeah!” like an absolute moron (see…me) then I urge you, see this film.