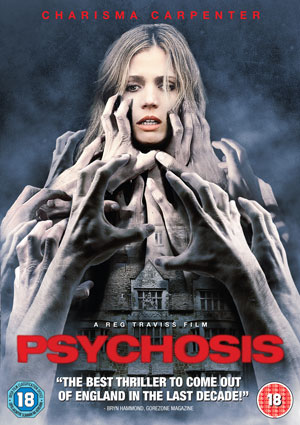 Psychosis is the new British horror film from director Reg Traciss. It stars Charisma Carpenter, if you’ll recall she was the assertive cheerleader from Buffy the Vampire Slayer many years ago and British model Paul Sculfor in his debut-acting role.

Successful horror novelist Susan (Carpenter) moves with her husband David (Sculfor) from sunny California to a secluded home in the rural English countryside to find peace and tranquillity to work on her new novel. Soon after the move, Susan begins getting disturbing images of death and murder and has some unsettling encounters with their creepy gamekeeper. Before long her worlds of reality and imagination begin to intertwine and she is no longer sure what she can believe in.

With such an intriguing and terrifying plot, expectations are high for Psychosis to be a frightening tale of one woman loosing her mind as her imagination gets the better of her. Unfortunately this is not the case. Although the narrative that follows Psychosis is a good one, when ideas from paper are put to film, it is no match. The house in which all the action takes place is not very scary and it has not been used to its full potential. If given the right lightening and direction, it could have literally come alive with terror in much the same way the hotel of The Shining did. Carpenter may have made watching Buffy enjoyable, but she doesn’t have the same effect on this film as her screams seem extremely phoney and don’t add anything to this film’s already limited believability. The actions of her husband are also dull with the majority ineffective in creating any more sense of the story. The only time sense is actually made, is during the concluding segment when you understand what Susan has actually been though, before given an unexpected twist at the end; this was probably the most shocking event in the movie and it only took 80 minutes to get there. It is also at the point the opening ten minutes that at first appeared to have no connection with the remainder of the film, finally make you go ‘ahhh’ with acknowledgement.

Do not expect a typical scary movie with Psychosis, as you will not be getting it. What you will get on the other hand is dullness, lack of interest and some darn right ridiculous goings on. Some will likely love Psychosis while others will not. Which side are you on?