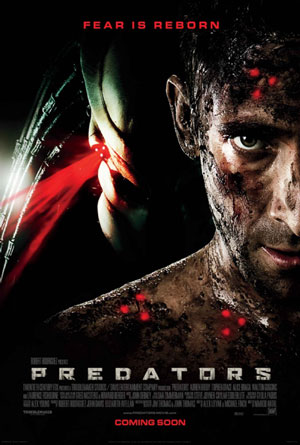 It’s often difficult to squint back into the past and remember a time when the predator franchise didn’t suck comically oversized balls. Despite the best efforts of a series of sequels so increasingly awful, the original still has a certain 80’s muscle bound, tongue firmly in cheek, firearms fully loaded, Austrian accented charm about it, that somehow managed to remain intact regardless of atrocious crimes against mankind like Alien vs. Predator and Alien vs. Predator: Requiem.

It’s clear from the get go that director Nimrod Antal and producer Robert Rodriguez both feel similarly about what has become of the predator over the years, hence this production desperately tries too hark back to the original and clamours to reclaim some of what made that film pretty special. Unfortunately…. it sort of… well….fails.

Though, that’s not because it’s a “bad” film per say. Rather….it’s gut wrenchingly, frustratingly average. A group of strangers wake up in free-fall heading towards a large jungle….they soon learn that each one is in their own way an extremely adept killer (so you get Walton Goggins as a serial killer, Danny Trejo as a Cartel hitman, Louis Ozawa Changchien as a Yakuza assassin etc.) and rather quickly it becomes apparent that something very big and pissed wants to hunt them down and fuck them up. The problem here is that a really good predator movie…the one that will finally do justice to the original’s legacy, needs to be much, much more than just a bunch of two-dimensional stereotype tough people getting picked off one at a time by a big grumpy alien.

A major issue I had was with the casting of Adrien Brody’s nose (and the actor attached to it) as an action lead. If he wants to try and expand his repertoire out in this direction, this was not the correct vehicle to show it off. Simply adopting a gravely Christian Bale Batman voice and getting all buff ’n’ shit does not an action star make. He’s a fine actor, as he’s proved time and time again, however, this character is such a shallow, uninteresting, lazily written part, lacking in any charisma or charm…that his presence just seems jarringly out of place and wrong.

It’s a film that really needs to be a lot more than it is…and probably could have been, instead of harking back to the original, it comes across more as a damp echo of it, reverberating still with many of the unwanted trait’s of the awful sequels.

Ultimately, any movie where an alien with dreadlocks that can turn invisible and has a shoulder mounted laser cannon and swords on it’s wrists and infra-red vision and a myriad of other pieces of outlandish technology all designed for hunting and killing things can actually make you feel bored half way through should hang it’s big floppy head with a spiky vagina mouth in shame.