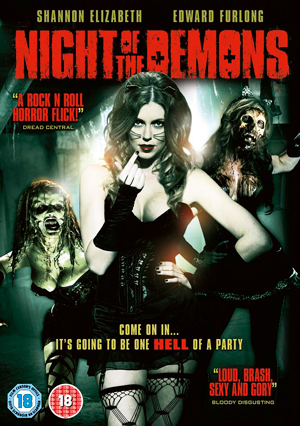 If you have ever seen and enjoyed the original cult classic Night of the Demons released back in 1988, then this remake will have you glued to the screen.

The plot is very similar to that of the original. In this instance, everyone gathers for a Halloween party at the notorious Broussard Mansion in New Orleans, where over eighty years ago, six people disappeared without a trace and the owner hung herself. When cops shut down the party, its host and six of her friends are left behind and mysteriously locked in. While searching for a way out they discover hidden rooms in the basement and the remains of the missing individuals. Soon it emerges supernatural forces are at work and one by one the friends are picked off and turned into some of the most hideous creatures cinema has seen in some time.

This is not your typical horror film. Night of the Demons has an uncanny ability to make you experience all the same emotions you did back then, as well as applause for the same creepy, ridiculously hilarious events that occur as well as the ways characters respond to them. The dialogue at times is shockingly bad and the acting not much better, but it is these qualities that keep it closer to the original and a little on the funny side. Such as when Colin (Edward Furlong) falls though the floorboards and Maddie (Monica Kenna) just happens to have a rope handy in the corner of the room. Such scenes are outlandish and unbelievable yet you accept them instantly.

The original film was controversial for its terror, violence and gore. Even though times have changed and many horror flicks go by the concept that the more gore you can pack into a film the better, Night of the Demons has not reverted, but continued to grasp viewers with its scares (there are a few of them) and inconceivable and preposterous situations that although make you laugh out loud, will also have you in their grip.

A bonus this movie has in comparison to others in its genre is its fast pace. It starts as the girls are getting ready to go to the party, instantly takes you there and it’s here the remainder of the film is set; all in one big, hollow and very creepy looking house. It is because of this you are never given time to dwell on boredom or make comparisons to the original; you take the film for what it is at face value.

This is certainly not one of Edward Furlong and Shannon Elizabeth’s most moving performances, yet seeing both turn into repugnant demons and getting up to all sorts of ‘naughty’ things is definitely worth a watch. Night of the Demons is the perfect teen horror flick and the ideal warm up for a terrifying Halloween to come.