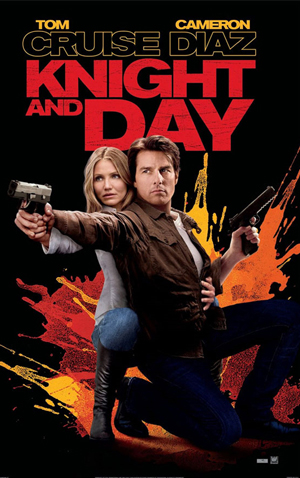 It has been a while since Tom Cruise graced us with his presence on the big screen, at least in something half enjoyable to watch. With his new action comedy Knight and Day, it is as though he had never been away, reverting back to the days he stunned onlookers with his Mission Impossible stunts.

In this escapist fantasy plot, we follow the adventures of Roy (Cruise) and June (Cameron Diaz), who after literally bumping into each other at the airport, go through a series of crashes (aeroplanes to cars), gun fire and close escapes while Roy attempts to protect a continuous energy battery called the Zephyr and its maker, a genius young inventor, from his own team.

The film is packed with high-energy action from car and motorbikes chases, aeroplanes and helicopters racing through the air to gun fire and Cruise enlightening us with some of his fighting skills. The interweaving of comedy though all the action is what makes it so enjoyable. Cruise’s character is especially witty when preparing June for another get away. Diaz’s character is a little more comical when her romantic feelings advance and when her fright kicks in. It is this combination of action, comedy and romance that separate Knight and Day from previous films attempting this. With the tremendous on screen relationship between Cruise and Diaz, things are even better.

The film changed lead cast members a number of times while in production. Adam Sandler, Gerard Butler and Chris Tucker were mentioned for the lead of Roy and Eva Mendes in talks about portraying the character of June. However, if you seriously sit back and watch the interaction and the chemistry at work between Diaz and Cruise, you will understand there were no two better to make the situation an enjoyable and at times hilarious watch.

Knight and Day is not perfect, but no where near as horrid as reviews from America have made it out to be. Although it may have bombed at the US box office, it will not have the same outcome in the UK. It is an original movie, aimed for adults with comedy, action and a little bit of romance. This is one of Cruise’s finest performances in a long time and exactly the film he needed to re-boot his career. With Mission Impossible IV in the works, look set to be seeing a lot more of this man in the near future.