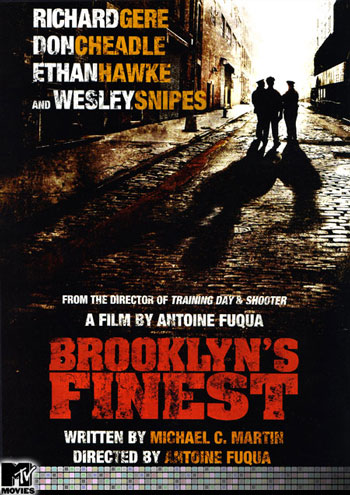 First and foremost, this is a mean film. That’s not to say it’s a difficult watch, far from it; Antoine Fuqua’s return to the world of crooked cops after the Oscar-winning tour-de-force that was Training Day, is an extremely watchable, engaging, powerful, jagged and thoughtful thriller. I just wouldn’t advise going to see it at a 12:45 showing on a sunny Monday afternoon….it’ll put ya in a funny mood for the rest of the day let me tell you. The world will feel a hell of a lot more relentless, cruel and dark than it did wandering into the theatre; unless you just happen to exist in a murky twilight of drug trafficking, sex-trading and gang violence…in which case…you’ll feel right at home.

Anchored around three central characters, and set over seven days within the same area of Brooklyn, we follow Richard Gere’s dishevelled, almost alcoholic, potentially suicidal, cynical, beaten down cop Eddie. He’s seven days away from retirement and with a distinctly large hole where his soul might once have been after witnessing twenty two years of relentless crime on the streets. Don Cheadle’s undercover cop finds life becoming an increasingly arduous tug-o-war between the loyalties he has forged undercover amongst criminals, and the possibility of an easy life if he can put them away for good. Finally, Ethan Hawke’s complicated and craggy catholic Sal, faced with financial dire straights due to a constantly expanding family (clearly a firm believer in Monty Pythons ‘every sperm is sacred‘) and having to pursue an extremely risky, not-really-very-legal means of dealing with it.

It is a film that does not deal with right and wrong as black and white statements, but rather, things that must be taken into account depending on their context. As we watch each of these characters forced into some extremely dark corners as a result of the personal compromises ruling over their lives, it’s clear that this is a movie that exists in a murky grey world, where what may seem the correct course of moral action on paper, is just not logistical when dealing in a real world situation. It’s powerful stuff indeed, with turns from each of the actors mentioned that really, really, make you care for these characters. Right from the get go, you want them to succeed; to over come their problems; to be able to sit back safe in the knowledge that whatever gets thrown at them, they will overcome them.

However, this is not Richard fucking Curtis’s version of the world, as much as you want to make believe away the notion that the world is not this strikingly violent, it’s as clear as day that these stories will not unwind pleasantly…and sure enough, they don’t. Expect some real emotionally weighty material slung about before the credits role.

It does get a tad…much at points. The sheer amount of shit being heaped upon these people…people that really don’t seem to deserve any of the punishment that the beardy, satin-clad man in the sky is dishing out to them. It almost verges on becoming hard to take seriously. Though, saying that, it never tips into enough of a nihilistic hell that you stop caring. This is an engaging and powerful thriller that has taught me one thing in particular…