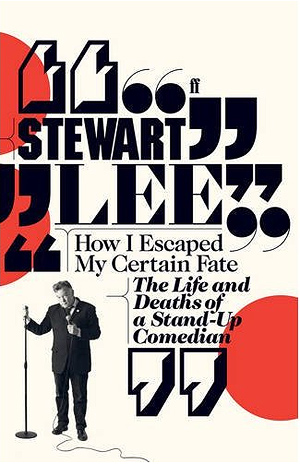 Stewart Lee is a comedian. A very marvellous comedian. His recent BBC2 series, Stewart Lee’s Comedy Vehicle, shuffled him closer into public view with its low-key combination of stand-up and sketches. It was the culmination of several years of building up a discerning audience of people who understood and appreciated his work. Prior to this, engulfed by disillusionment and apathy, Lee had left stand-up in 2001. This book follows his efforts at re-entry into a career that now has him praised and acclaimed as one of the most challenging and original comics working today.

The book opens with a charting of his initial interest as a teenager in comedy, to establishing a successful performing partnership with fellow comic Richard Herring, and to his eventual and thorough disenchantment with the stand-up craft that had so previously enthralled him. It goes on to describe what he did in the absence of a mic and stage – most notably co-writing and directing the eminently controversial Jerry Springer: The Opera – and the circumstances that led to him reconsider his muted, virtually unnoticed retirement from stand-up.

From here, things get very interesting. What follows are three complete transcripts of full-length performances (that are also helpfully available on DVD) broken up by chapters explaining the circumstances and influences that led to him writing these particular shows. The transcripts are often funny to read, though at times I wondered if people who didn’t know of Lee could find them amusing in the absence of a mental image, without be able envision the hilariously laborious pauses that break his routines up into calmly cobbled flotsam of thought. But this is why Lee is a spectacular comedian. He needs to be seen, to be experienced in the same room as you, to observe him playing with and moderating the mood, tone and the beads of moisture between your buttocks. Which is why the transcripts aren’t just blithely strewn across the page like a pale corpse.

Each page is, without exaggeration, heaving with footnotes, appendages, and academic post-its fluttering all over the routines. Lee uses these asides to dissect even the most seemingly mundane off-the-cuff remark of a routine and delineates his thought processes behind them, not just exploring the meaning and intent behind almost every word but also every pause for breath, every gesture and sideways glance, and explains how they relate to the themes and ideas he was intending to explore on stage. It is gloriously busy, and infused with such an exciting assertion of artistic independence. Stewart Lee has such an adoring fringe audience (although it’s less a fringe now and more a long, bristly Rapunzel weave of commitment) that he doesn’t have to worry about alienating or inveigling readers. As such, the book unabashedly dances in it’s own gleeful filth of critiques and pop-shots, of snipes and finger wagging at anything and everything from unappreciative audiences, to other comedians, and even his own inadequacies and failings as a performer.

In a comedy climate where people are triumphed and fast-tracked to appearing on Live At the Apollo because they’re innocuously watchable through dead eyes, and a climate where comedians rarely criticise each other publicly for fear of compromising their career, there is solace to be had in Lee’s relentless, care-free critical shrugging. For this reason, the book is easy to recommend to those who have never of heard of Stewart Lee. The level of analysis that fills this 378 page book (that also has other transcribed routines, interviews and tidbits at the back) should be appreciated by anyone interested in the minute craft and intense deliberation that goes into building a comedy routine.