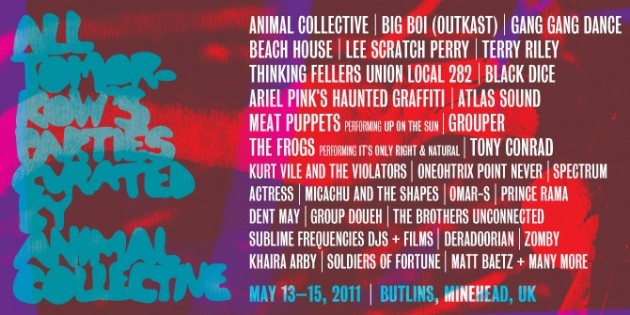 This year’s annual spring trip to Butlins was prefaced by the sad news that this may be the last ever May ATP. The reasons for this aren’t clear cut, but dwindling ticket sales over the past few years and the rapid growth of ATP as a major events planner has forced the festival to explore its options. For now, emphasis is being shifted to two Butlins weekends in December, as well as a new London based event that shall be curated this year by Portishead. I, for one, shall be sad if this is the last of the May events, but this year’s curators Animal Collective ensured that the weekend will be one to remember.

Despite the usual bitchy message board debates following the announcement, Animal Collective make perfect sense to me as festival curators. Not only have the band been a mainstay of leftfield independent music for over a decade, but they’ve just finished promoting their biggest critical and commercial success, Merriweather Post Pavilion. On top of this the band are key players in a wider community of independent music, with plenty of friends in like minded bands and, most importantly, an eclectic and interesting taste in music. Essentially, these are all factors which are crucial to curating a good ATP and Animal Collective tick all of the boxes.

As if to demonstrate the band’s eclectic music taste, Friday’s programme sees performances from Brooklyn noise mongers Black Dice, reggae / dub legend Lee ‘Scratch’ Perry, forward thinking electronic artist Actress, and one half of OutKast, Big Boi. While all of these artists inspire in a variety of different ways, it’s the latter which stole the show. This may not have been Big Boi’s usual crowd, but he is nonetheless electric as he treats the crowd to a range of OutKast’s greatest hits as well as the highlights from last year’s solo effort Sir Lucious Left Foot: The Song of Chico Dusty. His energy is ramped from the beginning, as he races across the stage engaging both sides of the crowd. As a huge OutKast fan it’s a welcome surprise to see so much of the group’s classic material performed, with the likes of ‘B.O.B.’, ‘ATLiens’ and ‘Rosa Parks’ all delivered with style and going down a storm.

After some familiarly messy scenes in the Crazy Horse rounding off Friday’s entertainment, Saturday begins with something a little different. Making use of the on site swimming pool at Butlins, there is a two hour session of ‘Wet Sounds’ which unexpectedly turns out to be one of the weekend’s highlights. This basically involves eerie ambient music being pumped around the swimming pool and underwater, with different sounds appearing underwater to those on the surface. Before the session was up there was even a run through of the recent Panda Bear album, Tomboy, which couldn’t find a more perfect setting to suit its woozy, tropical textures.

Getting back to the dry, yet curiously foul smelling (it’s definitely the hot dogs) Butlins Centre stage, Meat Puppets are on and they’re performing their 1985 cult classic Up On The Sun. The band joke that they don’t even remember the year 1985, let alone this album, yet they seem to get through it without a hitch. Performances form Ariel Pink and Beach House are to follow, and while they prove popular, have never really captured my interest and this was really no exception. Having opted to see Animal Collective perform on the Sunday instead of Saturday, this leaves Detroit techno legend Omar S to round off Day two with a tasty 2 hour slot over in Reds. While perhaps drawing from a more varied range of styles than I had expected, the producer shows why he is one of the best in his field with the selection of a lively and crowd pleasing set.

Offering something completely different again, Sunday morning begins with a performance from West Sahara’s Group Doueh. Having very limited knowledge of the band‘s work beforehand, they exceed all expectations with their fusion of western rock structures and Turkish Psychadelia. A mixture of almost gospel like female vocals and a guitarist who shreds the electric guitar on top of his head with the most stoic of facial expressions, make this very engaging stuff, in turn sending dozens of audience members queuing for the merch stand.

Moving on from a group that had seemed so humble on stage and grateful of their place on the billing, it becomes time for Zomby to pull one of his now notorious no shows. While clearly a talented producer, Zomby’s behaviour once again reeks of disrespect and once again leaves punters (and fans!) grumbling at his lack of consideration for everyone concerned. Not only is it a shame not to have seen him perform, but a slap in the face to Animal Collective who invested faith in him, and all the other bands that the group weren’t able to choose to accommodate him. There will come a time when promoters become tired of giving Zomby a chance, and to be fair, that time is probably overdue.

Celebrating their sensational new album, Eye Contact, the weekend’s penultimate act are Gang Gang Dance. The experimental Manhattan quintet have hit a real landmark in their career, producing an album that encompasses and extends on all that they have done so well in the past. The strength of the band’s newest material really shines through in this performance, with standout tracks ‘Glass Jar’ and ‘MindKilla’ closing the set on a real high before the weekend’s curators take to the stage.

In many ways Animal Collective are a frustrating live band, and I think it’s safe to say their performances over the weekend seemed to divide opinion. The band appear to have no interest in ever playing a greatest hits set, in fact, the weekend’s set lists were built almost entirely of completely new material with a sprinkling of crowd favourites including ‘Brothersport’, ‘Summertime Clothes’ and ‘Did You See the Words?’ What’s more, despite having two slots over the weekend, the band apparently performed almost exactly the same set both nights which perhaps seems a little wasteful. Even so, Animal Collective’s live show has never really been about individual songs, and with a little perseverance their immersive performance seems to win over the majority of the crowd. With elusive fourth band member Deakin now welcomed back into the line-up, the band are now playing almost like a traditional rock band. Gone are the synth podiums and tall flashing lights, replaced by an actual drum kit with Panda Bear at the helm. It’s nice to see that the band look ready to move in yet another direction, and their performance hints at something potentially very exciting on the horizon.

While this feels like an odd, perhaps transitional stage for Animal Collective as a band, it’s precisely this kind of will for change and experimentation that is completely characteristic of the weekend’s events and indeed ATP. What the future holds for this wonderful festival remains to be seen, but one thing’s for sure, I’ll be following it on whatever path it takes.